This entry was posted on March 12, 2015 by Blast Kiteboarding.

With such a strong forecast for wind many people made the journey to Porthcawl for the Blast Kitesurf Frozen Jam from as far away as Margate, Penzance and Newcastle. Unfortunately the wind gods had other ideas  and teased us all weekend with light winds...just enough to coax you into pumping up your biggest kites (or begging / stealing one of the many big demo kites)

Everyone was waiting / expecting the winds to really kick in on Saturday but they just didn't happen. Never mind, there was loads of kit to drool over from some of the key players in the market, including all the latest boards from Shinn and kites and boards from Airush, with Mike B on hand to explain the technical differences in person.

Saturday evening and it was off to the Pub to watch Wales win a game (at last) and onto the Waterfront to meet with many of those that had stayed down for the whole weekend. There was plenty of hope for the next day with yet again a solid forecast so we went to sleep dreaming of a session on 5/7m kites. 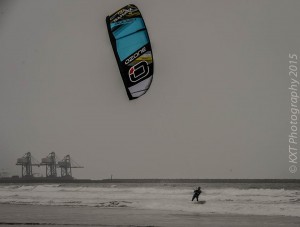 Sunday arrived with once again light winds, no problem it will pick up soon so everyone kitted up and once again headed out on the big gun kites. The Ozone Airush, Flysurfer and Airush Vantage race kites were the choice kites. Since they were already all on the water by the time I was heading out I took a 10m Ozone Catalyst and Airush Sector out.....amazing! The Airush Sector truly is a light wind weapon.

Whilst everyone cruised the shoreline on 17/18m kites I was able to head out the back and do some huge tacks the length of the beach. Then at around 3pm mother nature decided to show up and boy was she in a bad mood, the winds went from 15mph ish to over 50mph in a matter of a minute or two. Obviously there was instant carnage! Everyone tested they're QR right there! The Airush Tent could have done with a QR also...Mike B was seen literally hanging onto it as it fought to self launch at one moment. 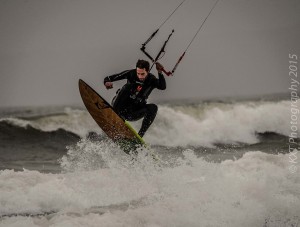 It was time to call it a day and head to the bar for the prize giving! Instead of prizes given out to different categories like best trick etc it was decided to hand raffle tickets out to everyone, that way all got a chance to win something, instead of just the usual few people.   We'd like to say a huge thanks to those who helped make it yet another great Jam, despite the poor winds...we could not do this with out you. Airush / Shinn / Kitepix / Epic / Axis / Ozone / Blankforce / CrazyFly / KXT Photography

Check out the video here: