It's good to explore

This entry was posted on November 7, 2016 by Blast Kiteboarding.

The season is almost over for the Blast School but on the plus side it allows us to venture a bit further afield than our regular local beaches we spend so much time at during the teaching season.

Many years ago before I discovered the joys of kitesurfing I used to surf and one of the things I loved most about surfing was the travelling and discovering new locations. I have fond memories of trekking across field after field up in the very far North of Scotland trying to find that elusive perfect wave.

So when I took up kitesurfing back around 1999-2000 it was the same feeling I rediscovered, hours spent checking over maps, driving down dead-end lanes, no one back then knew much about which wind directions were do-able. Until then the few of us that did kite just went to the known windsurf spots, which to be honest were actually some of the most undesirable locations to kite, i.e. usually very rocky and also gusty conditions.

Eventually I discovered that places like Rest Bay in Porthcawl were in fact better than the alternatives like the Knap in Barry. This was part by accident as I was still mostly surfing and on a few occasions I'd get to the big ope beaches only to find windy cross on conditions. Now you have to understand that at the time it was generally accepted (at least here in S.Wales) that cross shore was the "only" way.

Obviously it's nice to fly off to some hot windy place like Brazil, Canaries or SA etc But we also have an abundance of amazing beaches right under our noses here in the UK.

We really are truly blessed living in Wales. Having so so many amazing beaches to choose from and covering all wind / swell directions. The past few months we have had a huge wind drought here in S.Wales, it seems to happen every year around the same time....Autumn!!
Global Warming??
Weird hey, you'd naturally think that Autumn would be the start of the windy season, right? Well not for the past few years at least!

For the past few seasons it seems to be nothing all September and October and then by mid November BAM, we get a huge dose of gale force winds, all or nothing!

Anyway, I digress. The past few weeks have been poor but there have been a few days of either Easterlies or Northerlies, not exactly idea especially as we live on the South West coast. So with the last few lessons cancelled due to undesirable wind directions or next to no wind locally, after a little time checking google maps etc you can normally fine a decent beach somewhere further afield on our wonderful coast line that will hopefully be "all time"

So with a few good mates it's time to head off, a mini adventure. To be honest it's a very "mini" adventure as we only have to travel approx 90mins and we can cover all of Pembroke and half way up the coast of Wales...this gives us the choice of hundreds of beaches. At this time of the year these beaches are also quite, very quiet! 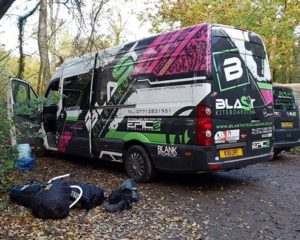 This weekend just gone "Bonfire Night" was due to be NNE winds, rubbish locally but checking the maps we could see numerous beaches down West Wales. So we decided to load up the vans with good friends Alun & Wendy and check out some new spots. Actually to tell you the truth Alun had already kited where we were headed many years ago but that's another story. 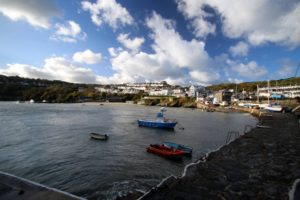 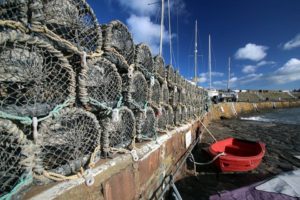 New Quay was the first choice and so we booked a AirB&B for the night (dog friendly too, so Monty and Toro could come).

Parking in a beautiful woodland carpark was just the start of the experience! 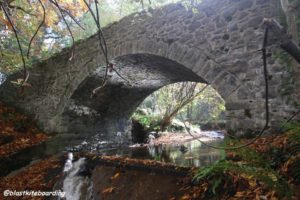 This is the stream next to the carpark.

The walk to the beach was down a beautiful wooded valley path, I love the sound of crunching leaves under your feet. 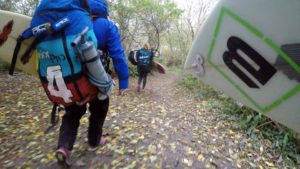 Once at the beach we were greeted with a strong cross on winds and 2-4ft surf.....and an amazing view! We spent the next few hours kiting all by ourselves! The winds were very cold being from the North but with new winter wetsuits from Mystic to keep us warm we were fine.

Small kites were the order of the day, we all rigged up our "go to kite" the 6.5m Renegade by Epic Kites. Actually Sarah would have been better on her 6m Ozone Enduro as the 6.5m was a little too much for her at times.

During the session I managed to get back on dry land and grab a few shots with the SLR of both Sarah and Alun out kiting. 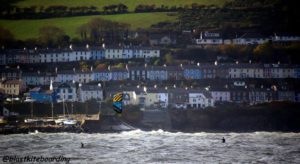 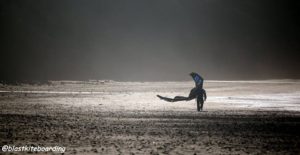 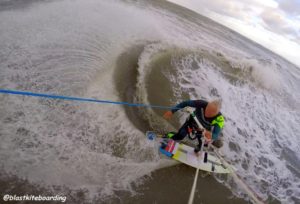 Me enjoying my new Mystic Majestic winter suit, my first session this year in a winter suit. Brrr winter is def coming!

A few hours later and we were all very happy with the decision to take the risk and drive a little further west and explore.

Hopefully we will get plenty more days like this over the coming months, fingers crossed!