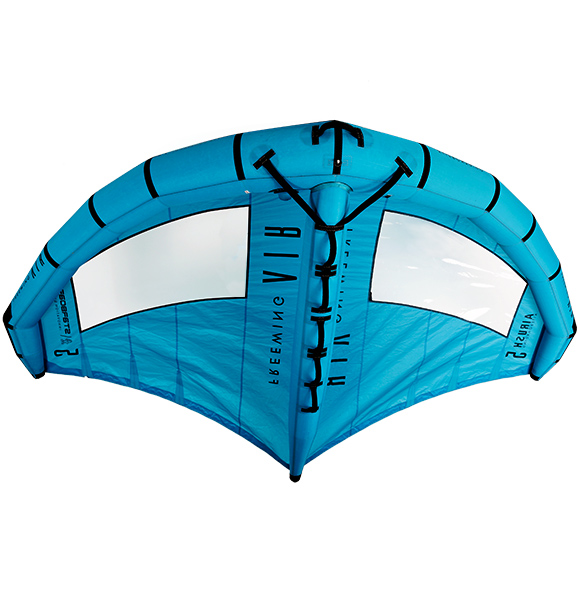 FOR ALL KIND OF USERS

We focused on reduced arm pressure and extra comfort when riding for long periods of time. Every size has been precisely designed to achieve maximum control and performance. Optimal for wingfoil beginners to down-the-line wave riders.

FOR A MUCH LARGER FIELD OF VISION

High-visibility windows allows safety in crowds – the more you see, the safer you’ll be!

The inward angled wingtips on the 5, 6, and 7 m2 sizes to keep the tips out of the water when starting or overpowered. 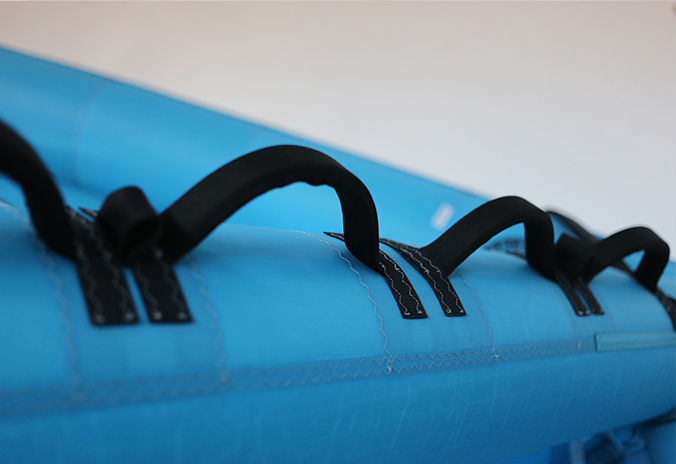 For micro trimming at speed. 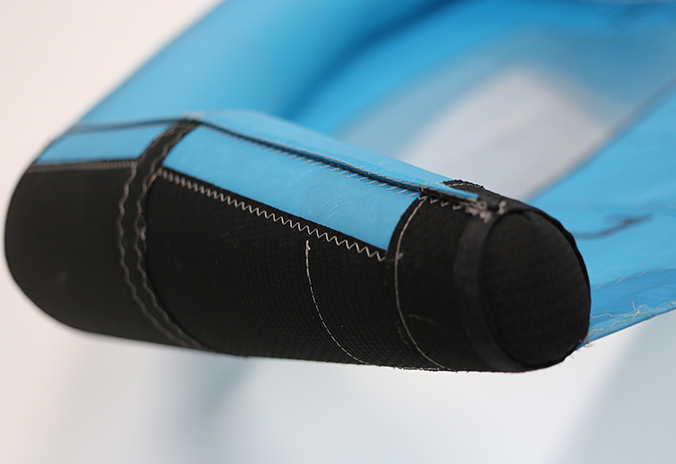 IN THE MOST CRITICAL AREA

The Kevlar, found in a bulletproof vest, is put in the most critical area to protect the FreeWing from wearing while minimizing weight. 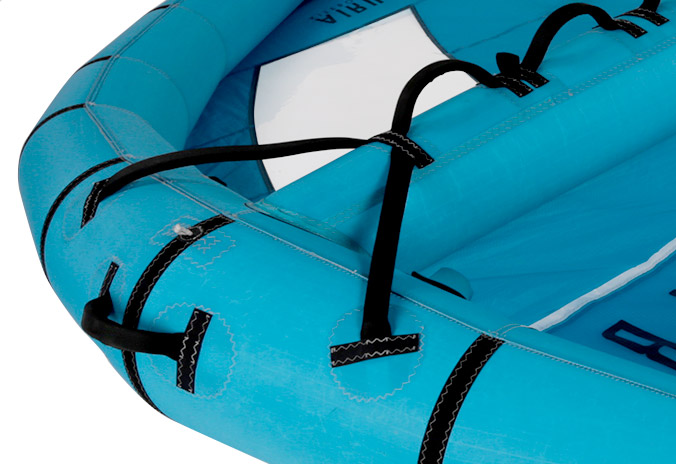 Angled handles for convenience getting started and to perform jibes and maneuvers.

The included leash has a cuff system that allows you to strap in with only one hand. 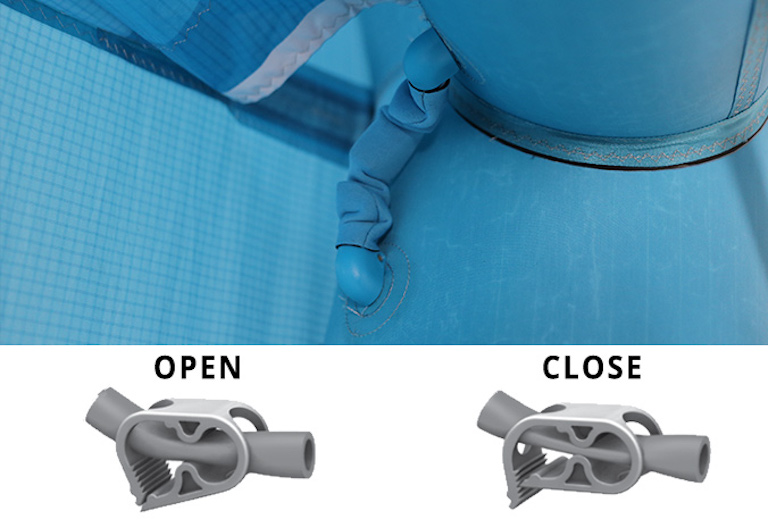 ANOTHER INNOVATION FOR YOUR SAFETY

The hose clamp is used to isolate the air pressure in the central strut and leading edge. In the event of leaking bladder, the clamp ensures that some air remains in the wing.

To open the hose clamp, push on the lever to allow the clamp to open.

To close the hose clamp, squeeze the clamp together while feeling the teeth ratchet until clamp feels tight. 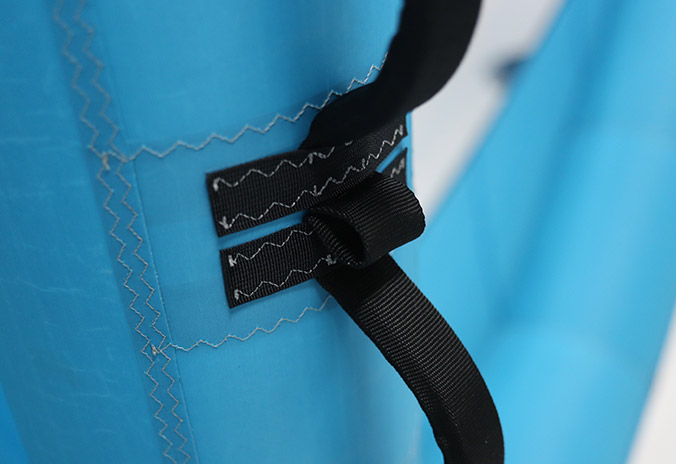 The harness lines reduce fatigue in the arms, allowing you to ride for longer periods. 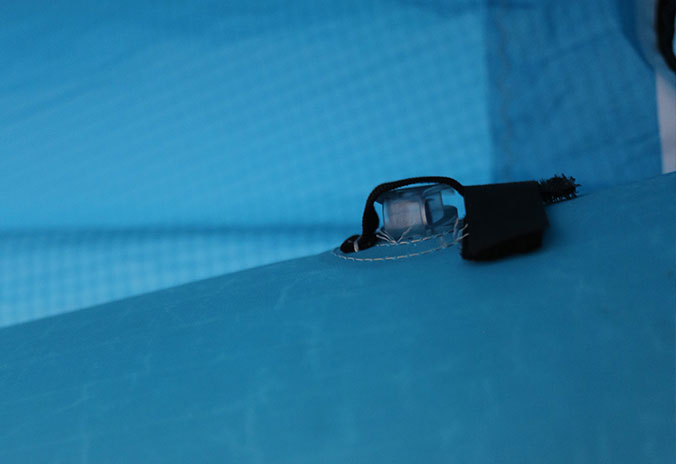 For you to deflate the larger wings faster and easier. 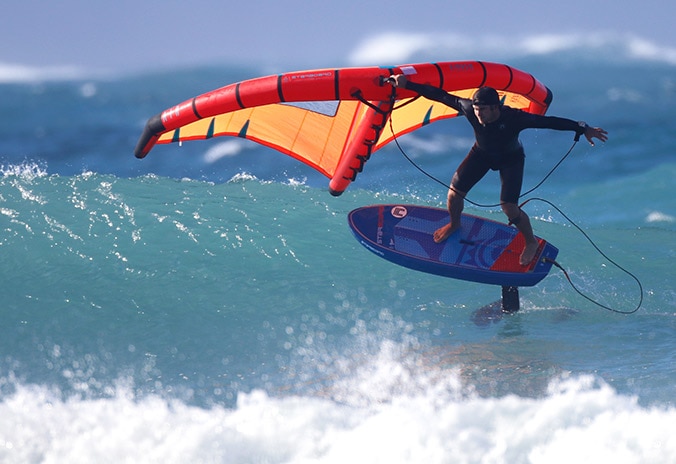 Very powerful, with arm pressure minimized due to easy de-power. 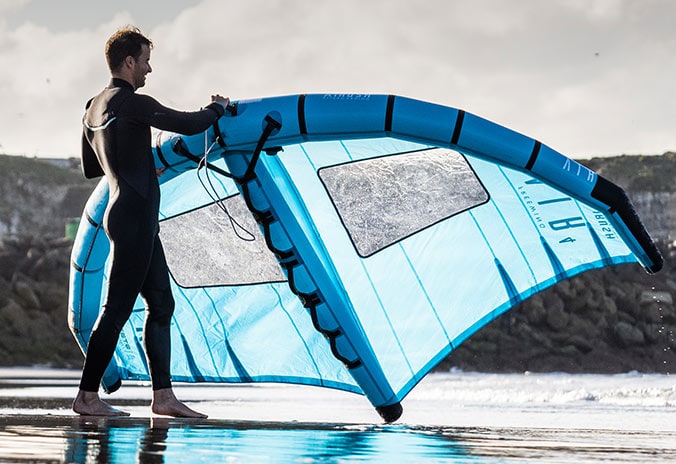 Airush Says:
The all new Airush FreeWing Air is an all-around wing that’s easy to use. It’s especially controllable when overpowered and efficient when pumping in light wind due to the generous strut diameter which solidifies the frame’s stiffness. The wing is surprisingly stable when luffed in the neutral position, making it ideal for downwinders and carving.

Tkb Says:
The Airush FreeWing Air is new this year with an out the gate approach to wingsurfing that offers a solid combination of flying performance and a wide range of features that make it an excellent choice for wingers of all levels.

One of the first things we noticed (as well as other wingsurfers at our beach) is that the visual size of the wing (we tested the 4m) looks a bit smaller than some of the similarly-sized wings on the market, yet from the moment we got on the water we were impressed with the wing’s surprising power and range. The FreeWing Air takes a small to medium-sized approach on the leading edge and boom diameter, while the leading edge incorporates sweptback wingtips that shift the sail plan away from the area that typically likes to grab the water and cause crashes. When butted up against other wings, the FreeWing Air tends to have more canopy surface area allocated to the trailing edge with a slightly longer boom. The boom uses a luff strut to add a little extra profile to the canopy and the airframe does an excellent job of maintaining a clean canopy with good tension. The FreeWing Air has middle of the road dihedral built into its leading edge (slightly less than some of the other wings) and features a single leading edge hover handle, five handles along the center of the boom and two (noticeably smaller) Y-handles at the intersection of the boom.

The main handles on the boom use webbing embedded with EVA foam inside to give the handhold some extra dimensionality in your palms. The EVA foam is a little bit thicker than similar type handles on the market and felt rigid, but after our first and second sessions the handles softened and delivered good comfort and excellent control over the wing. One thing which is quite noticeable on Airush’s main boom handles is that the loop is a lot smaller than other handles on the market and spans a wider distance. The handle doesn’t droop down from the boom quite as far, which removes the movement or extra play in the handle and makes your sing inputs feel more direct. At first, the shallower handles made it harder to get our hands to land on the handle (it feels and looks like a smaller target when reaching for power during clutch moments), but after a couple of tacks our muscle memory kicked in and our hands found their mark every time.

The two Y-handles located at the intersection of the boom and leading edge are noticeably smaller on the FreeWing Air compared to its competitors. It seemed like the Y-handles were a bit farther forward which really helped to straighten out our arms on long upwind slogs. Some riders love Y-handles, others not so much, so if you have to have them for the tech sheet, you might as well make them small (our opinion on Y-handles is just one of many). The overall feel and size of the boom’s main handles earn high marks for comfort once they’ve broken in and the shallower loop offers a supremely direct feel and excellent control over the wing. The FreeWing Air might be a pivotal argument against the future of floppy handles in wingsurfing.

In terms of performance, the first thing that stood out for us is how the FreeWing Air seems to offer an extra stiff airframe that does a great job of getting the most out of the wing’s surface area. If a wing’s leading edge flexes, you tend to lose power because the wingtips compress together and the canopy releases the power of your pumping motion and the wind. If you happen to be underpowered while trying to waterstart on a smaller board, you need every ounce of power and the FreeWing Air does a great job of maintaining its shape and delivering crisp pulses of power. If we started our first session with doubts about the size of the wing, the FreeWing Air’s stiffness more than made up for that with seemingly increased range and efficiency with a smaller canopy.

We also noticed right off the bat that Airush’s sweptback leading edge wingtips seem to really help avoid dragging the FreeWing Air’s wingtips in the water—this is one of the biggest challenges for new wingsurfers and causes the wing to flip and crash. The angle of the FreeWing’s leading edge doesn’t seem to grab the water so aggressively when you let the kite drop too far down along the side of the wind window; since there’s no boxy corner to the wing’s leading edge, accidental brushes with the water were easy to correct and recover from. The overall wingspan and leading-edge shape seem to work together to combat tip dragging, which can undo wingsurfers of every skill level.

The FreeWing Air impressed us with its upwind performance; its airframe felt really comfortable at higher angles of attack and allowed us to point just a little bit higher during upwind slogs. It’s small to medium-sized inflatable spars seems to be more efficient while grinding upwind, which allows you to do the upwind part of wingsurfing faster, getting to the good part of downwind carving and swell riding quicker. The sweet spot on power delivery seemed middle of the road. Some wings can feel on/off in terms of power delivery while other wings seem to generate intuitive/smooth power delivery along the entire length of the boom’s sheeting motion. The FreeWing Air seems to sit in the middle of the spectrum, offering fairly smooth and intuitive power delivery across a solid range of angle of attack/sheeting.

While in the hover position, the FreeWing Air feels fairly neutral with a small amount of positive lift that feels stable and allows you to point down a wave face and go. While the wing does incorporate some extra features (window, wrist leash swivel and Y-handles), the weight that comes with these things doesn’t present too much of a compromise on hover performance and agility while downwinding. The FreeWing Air does a good job of integrating the features that newer wingsurfers tend to gravitate towards (windows and Y-handles) while still keeping the overall weight down and the agility up. The windows are a little bit smaller than some of the first-generation wings that came with windows, so this keeps the material weight down but also requires that you move the wing around in order to use the windows to spot riders on the opposing tack.

The wrist leash has the Velcro noose design that allows you to slide your hand through the loop and then cinch down (compared to the two overlapping Velcro flaps). We like this design best of all because it is much easier to manage while holding the wing and offers a simpler process for attaching the leash, which makes it much safer while holding the wing in windy conditions or swapping with a friend on the water. The leash comes with a metal swivel which may come in handy if you’re practicing a ton of duck tacks or special freestyle maneuvers that spin the wing. For others, the swivel might be considered extra weight and could be removed.

Ultimately, the FreeWing Air demonstrates a solid balance between user-friendly handling, techy features and high-end performance. As a wait and see release, the FreeWing Air clearly benefits from watching the hit and misses of wingsurfing’s first-year products, but it also brings some carefully considered design characteristics to the marketplace that you don’t see anywhere else. The FreeWing Air seems like a great entry-level wing for the first-timer, while also offering well-designed controls and crisp performance that wingers of all levels will recognize and appreciate.

NEW HOW TO ARTICLES

Learn more about Wingfoiling with our how-to articles created by Airush experts. Starting from explaining about different parts of the wing components, how to inflate/deflate the wing, safety tips, to how to repair a FreeWing Air.

Be the first to review this product

This site uses cookies. By continuing to browse this site you are agreeing to our use of cookies. Find out more here.
x
© 2015 Blast Kiteboarding. All Rights Reserved.